What does Sigurd mean?

[ 2 syll. si-gur(d), sig-u-rd ] The baby boy name Sigurd is pronounced SIY-JH-er †. Sigurd's language of origin is Germanic and Old Norse, and it is used largely in the Manx and Scandinavian languages. Old Norse origin: It is a two-element name derived from sigr meaning 'victory' ; vardr 'guardian, defender'. Older forms of Sigurd include Sighvardh (Old Norse) and Sigurdr (Old Norse). The name was borne by the legendary dragon-slaying hero Sigurd of the Völsunga saga in Norse mythology; he was known as Siegfried in the Richard Wagner opera The Ring of the Nibelung (1876).

In addition, Sigurd is a variant form of the English and German Sigmund.

Sigurd is uncommon as a baby name for boys. At the modest height of its usage in 1901, 0.006% of baby boys were given the name Sigurd. Its ranking then was #935. The baby name has since experienced a drop in frequency, and is of only irregular use today. Within all boy names in its group, Sigurd was nonetheless the most frequently used in 2018. 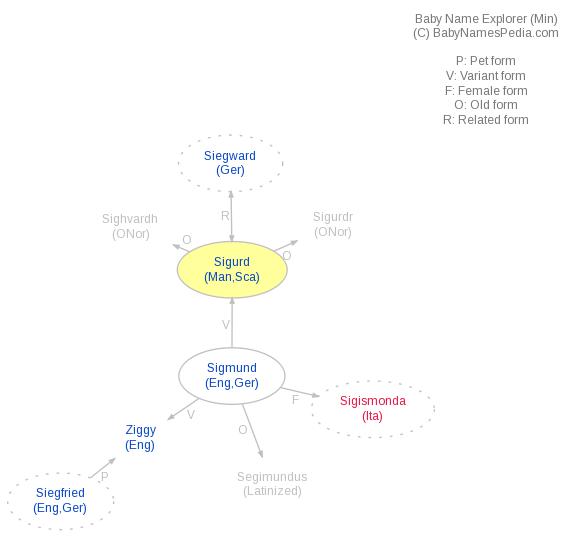