What does Simon mean?

[ 2 syll. si-mon, sim-on ] The baby boy name Simon is pronounced as SAY-MahN in English, Siy-MAON in French, or ZIY-MaoN in German †. Simon is used chiefly in the English, French, German, and Spanish languages, and its origin is Hebrew. The name is of the meaning he who hears, God has heard. A biblical name, it is derived from the element 'shama' which means to hear. Shimon (Hebrew) and Simeon (Hebrew) are older forms of Simon. The name was borne in the Old Testament of the Bible by one of the sons of Jacob and thus the founder of one of the twelve tribes of Israel named after him. In the New Testament, it appeared as the original name of the apostle Peter. It was also borne amongst other biblical characters, by another apostle called Simon the Zealot, the brother of Jesus, the man who helped carry Jesus' cross on the way to the crucifixion, and Simon Magus whose monetary offer to gain the power of the Holy Spirit gave rise to the term simony. In the medieval period, the forms Simon and Simeon were in regular use, but they fell into disuse after the 17th century. The modern form Simon saw a revival at the start of the 20th century. The name Simone (English, French, and German) is the female form of Simon.

Simon is a widely used name; it has 55 variants that are used in English and other languages. Variants used in English include Haimona, Saimon, Samien, Semein, Seymon, Shimmel, Siemon, Siman, Sime, Simeon (used in French, German, Russian, and Slavic as well), Siméon, Simmon, Simmonds, Simmons, Simonas, Simons, Simpson, Simu, Simyon, Siomon, Siomonn, Sy, Syme, Symonns, Ximon, and Zimon. The contractions Si and Sim (used in German, and Scottish as well), the pet form Simmie, and the variant spelling Symon (used in Greek as well) are other English forms. 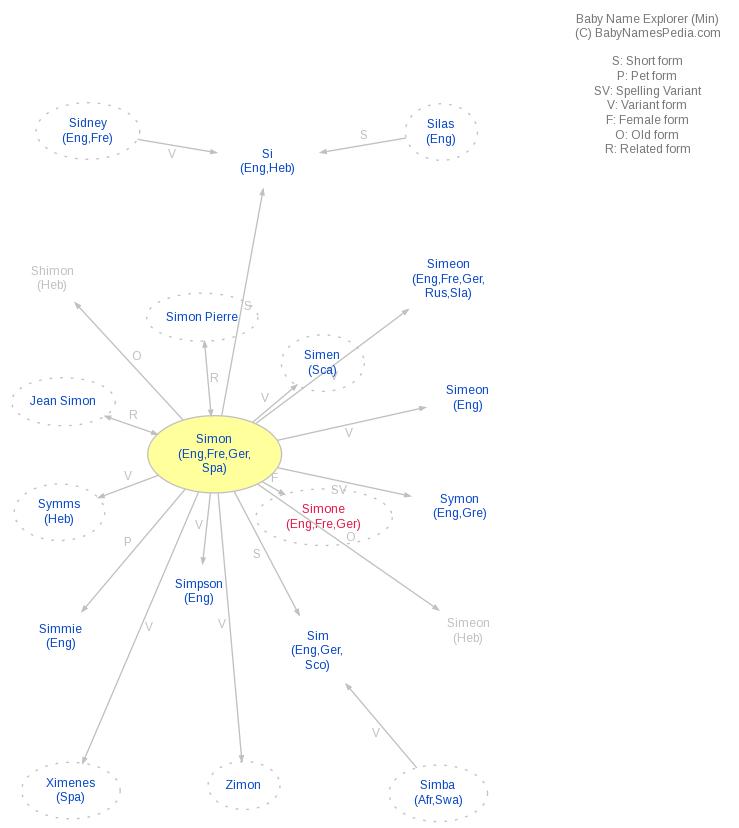