What does Simone mean?

[ 2 syll. si-mo-ne, sim-one ] The baby girl name Simone is also used as a boy name, though it is far more popular for girls. It is pronounced as Siy-MOWN- †. Simone is of Hebrew origin. It is used mainly in English, French, and German. The meaning of Simone is 'she who hears, God has heard'. It is a biblical name derived from the word shama which is of the meaning 'to hear'. The name was first adopted by English speakers in the 20th century. Simone is the feminine form of the English, French, German, and Spanish Simon.

Simone is a widely used name; it has 31 forms that are used in English and foreign languages. English forms of the name include Cymone, Monie, Sim, Simeona, Simeonne, Simina, Siminie, Simmie, Simminie, Simmona, Simona (used in French, Italian, and Scandinavian as well), Simonia, Simonina, Simonna, and Symona. Other English forms include the familiar form Simmi, and the spelling variants Cimone, Samone, Simmone, Simoane, Simonne (used in French as well), Somone, and Symone.

Simone is somewhat popular as a baby girl name. The name increased in popularity from the 1950s up to the 1980s. Its usage peaked modestly in 1988 with 0.042% of baby girls being named Simone. It was #311 in rank then. The baby name has slipped in popularity since then. In 2018, it ranked at #733 with a usage of 0.021%. Among the family of girl names directly related to Simone, Ximena was the most popular. It was 7 times more widely used than Simone in 2018. Simone has in the last century been primarily given to baby girls. 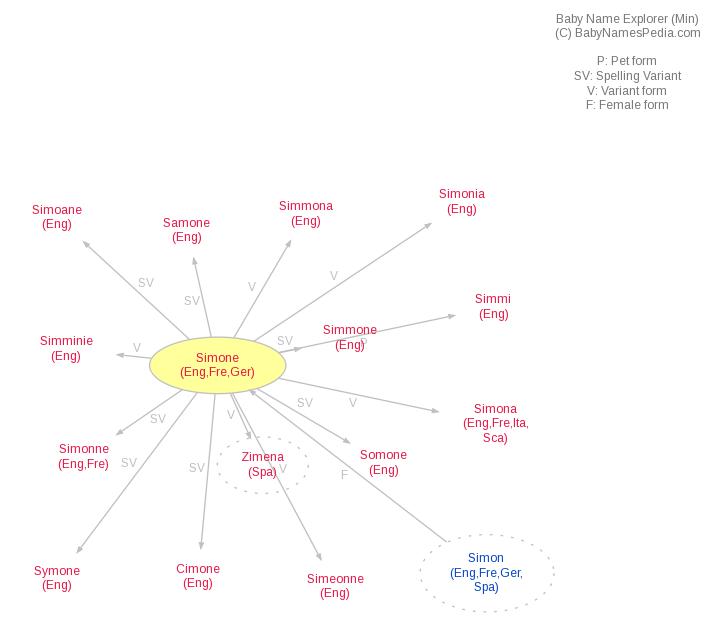