What does Son mean?

[ 1 syll. son, so-n ] The baby boy name Son is sometimes used as a girl name. Its pronunciation is SAHN †.

Son is used predominantly in the Korean language and its origin is also Korean. The name is of the meaning gentle.

Son's origin, as well as its use, is in the Vietnamese language. The meaning here is mountain.

In addition, Son is a variant of the name Madison (English).

Son is also a variant of the name Orson (English and French).

Son is rare as a baby name for boys. At the modest peak of its usage in 1901, 0.014% of baby boys were given the name Son. Its ranking then was #504. The baby name has since suffered a marked fall in popularity, and is today of sporadic use. Out of all boy names in its group, Son was nonetheless the most frequently used in 2018. 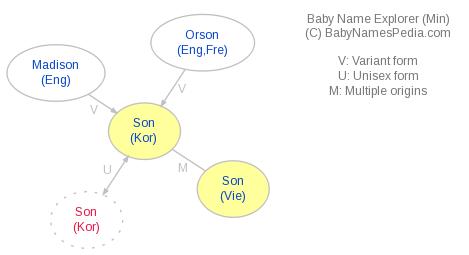