What does Sonny mean?

[ 2 syll. son-ny, so-nny ] The baby boy name Sonny is sometimes used as a girl name. Its pronunciation is SAHN-iy- †. Sonny is used chiefly in the English language, and it is derived from English and Old French origins. The name was originally a nickname for a young man. It was first promoted by the appearance of the character 'Sonny Boy' in the film The Singing Fool (1928) starring Al Jolson. The name is sometimes used as a diminutive form of other names such as Solomon and Saul.

In addition, Sonny is a diminutive form of the name Grayson (English).

Sonny is also a variant of the name Madison (English).

Sonny is also a variant of the name Mason (English).

Sonny is also a variant of the name Orson (English and French) in the English language.

Sonny is fairly popular as a baby name for boys. The name's popularity rose from the 1920s up to the 1970s. At the height of its usage in 1975, 0.021% of baby boys were given the name Sonny. It ranked at #427 then. The baby name has since experienced a loss in popularity. In 2018, its usage was 0.020% and its ranking #664. Within the group of boy names directly linked to Sonny, Mason was the most regularly used. In 2018, it was used 33 times more than Sonny. Sonny has mostly been a baby boy name in the past century. 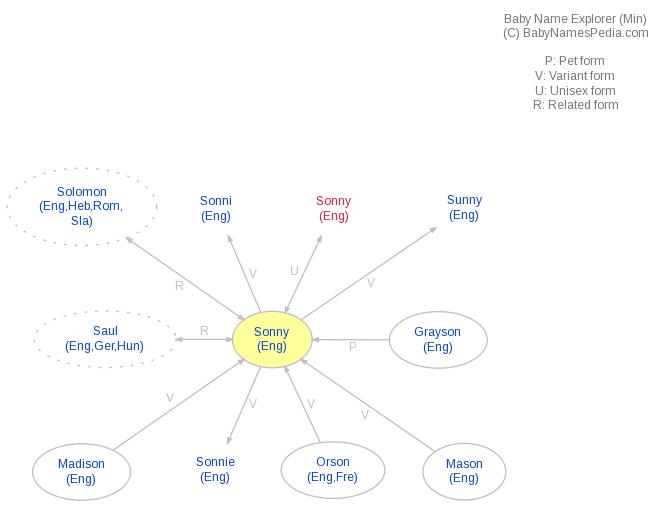