What does Stacey mean?

[ 2 syll. (s)ta-cey, st-ac-ey ] The baby girl name Stacey is also used as a boy name, though it is far more popular for girls. It is pronounced STEY-Siy- †. Stacey is of Old Greek origin. It is used mainly in English and Irish. The name first evolved from the masculine Stacy, but it can also be taken to be from Anastasia or Eustacia.

Stacey is an English and Irish diminutive of the English, German, Greek, and Russian Anastasia.

Stacey is also a diminutive of the English Eustacia.

Stacey is the feminine equivalent of the English Stacy.

Stacey has 29 forms that are used in English and foreign languages. English forms of the name include Stacea, Staceyan, Staceyann, Stacia, Stasa, Stasea, Stasee, Stasey, Stasha, Stasi, Stasia, Stasie, Staska, Stasy, Stazie, Steacy, Steise, and Taisie. Other English forms include the contracted form Stace, and the spelling variants Stacci, Stacee, Staci, Stacie, Stacy (used in Irish too), Staicy, Stayce, Staycee, and Stayci. The Russian Stasya is a form of Stacey that is used in foreign languages.

Stacey is uncommon as a baby girl name. At the height of its usage in 1971, 0.427% of baby girls were named Stacey. It had a ranking of #41 then. The baby name has seen a marked drop in frequency since then, and is used only on a very modest scale now. Within the family of girl names directly related to Stacey, Anastasia was the most popular in 2018. Stacey has in the last century been mainly given to baby girls. There were 10 times more baby girls than boys who were named Stacey in 1992. 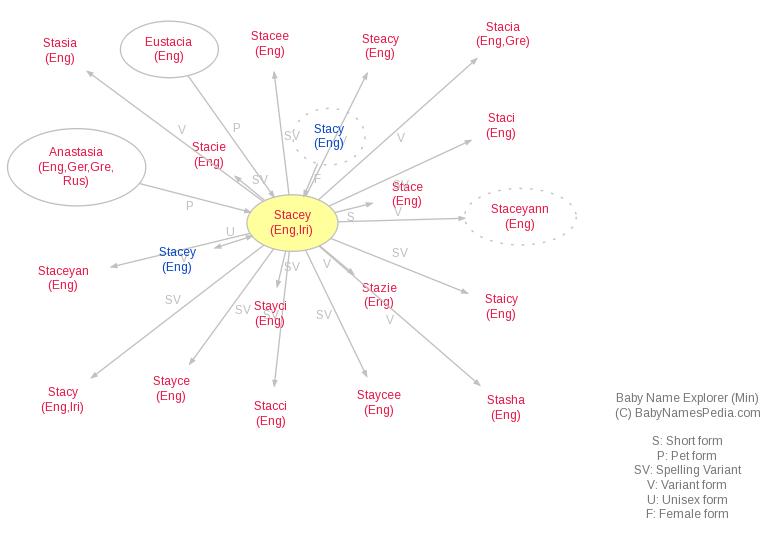