What does Stanley mean?

[ 2 syll. (s)ta-nley, st-anl-ey ] The baby boy name Stanley is pronounced STAENLiy- †. Stanley's language of origin is Old English and it is predominantly used in English. Stanley's meaning is 'stony clearing'. It is from stan meaning 'stone' ; leah 'wood, clearing, meadow'. The first name is derived from the surname, itself derived from a local name from various places so called in English counties such as Derbyshire, Durham, Wiltshire, and Yorkshire. The family name was borne by the earls of Derby. The given name was first used in the 18th century, and it was later promoted via the fame of the Welsh-American journalist and explorer Sir Henry Morton Stanley (1841-1904), famous for his discoveries in Africa.

Stan (English and Latin contracted form) and Stanly (English spelling variant) are other forms of the name.

Stanley is an all-time favorite. Today it is still a somewhat popular baby name for boys, though to a lesser extent than it was previously. At the height of its usage in 1916, 0.556% of baby boys were named Stanley. It ranked at #34 then. The baby name has since steeply slipped in popularity, and is in recent times of only occasional use. In 2018, it ranked at #707 with a usage of 0.018%, but it was nevertheless the most frequently used within all boy names in its group. 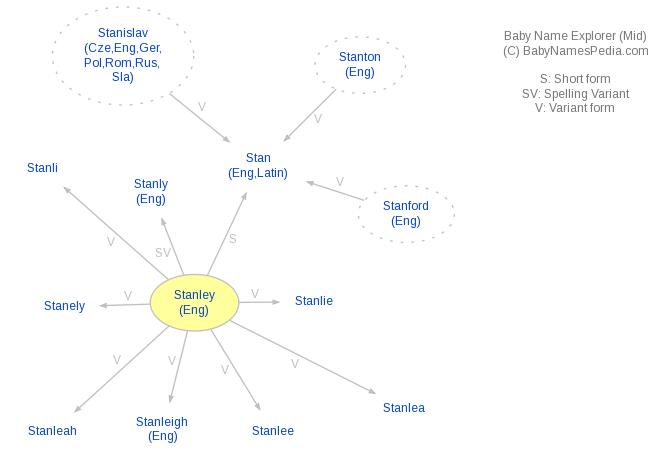