What does Stella mean?

[ 2 syll. (s)tel-la, st-e-lla ] The baby girl name Stella is pronounced as STAHL-aa- †. Stella is of Latin origin. It is used mainly in the English, German, and Italian languages. It is literally from the word stella meaning 'star'. The first name was initially derived from 'Stella Maris', a title for the Virgin Mary meaning 'star of the sea'; from the medieval period it has been bestowed simply in reference to the brightness and beauty of a star. It first appeared in the 16th century from Sir Philip Sidney's sequence Astrophel and Stella (1591), as sonnets from Astrophel, a name meaning 'star lover', to his lady Stella. The name later appeared in Jonathan Swift's letters to his friend Esther Johnson, published as Journal to Stella (1766); the name Esther also means 'star'. The form Estella was later borne by a lead character in the Charles Dickens novel Great Expectations (1861). The name saw a revival in the 18th century.

Stella is very popular as a baby girl name, and it is also considered trendy. Its usage peaked in 1902 with 0.384% of baby girls being given the name Stella. It was #63 in rank then. The baby name has markedly fallen in popularity since then. In 2018, it ranked at #38 with a usage of 0.277%, enjoying a minor resurgence in the recent decade. Among all girl names in its family, Stella was the most popular. Stella was used 14 times more than the next most popular name, Estella, in 2018. 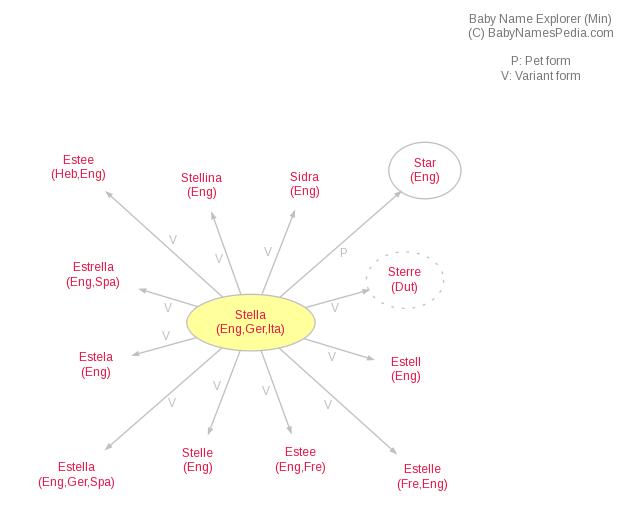