What does Stephanie mean?

[ 3 syll. (s)tep-ha-nie, st-ephan-ie ] The baby girl name Stephanie is also used as a boy name, though the use for girls is far more popular. It is pronounced STEHF-ah-Niy in English or -SHTEH-Faa-Niy in German †. Stephanie's origin is Old Greek, and its use, English and German. The meaning of Stephanie is 'crowned'. It is a biblical name derived from the word stephanos with the meaning 'crown, garland, wreath'. The name is from the French Stéphanie, itself from Stephania (Latin), which is from Stephana (Latin). Stephanie is the feminine form of the English Stephen.

What are the Variant Forms of Stephanie?

Stephanie is an all-time favorite. At present it is still a rather popular baby girl name, but not to the degree it was previously. The name grew in popularity from the 1900s up to the 1980s. At the height of its usage in 1984, 1.277% of baby girls were named Stephanie. It was #6 in rank then. The baby name has seen a steep decline in frequency since then. In 2018, it ranked at #318 with a usage of only 0.056%, but it was nevertheless the most popular within all girl names in its family. Stephanie was twice as popular as the next ranked name, Stevie, in 2018. In the last century Stephanie has primarily been a baby girl name. In 1989, 168 times more baby girls than boys were given the name Stephanie. 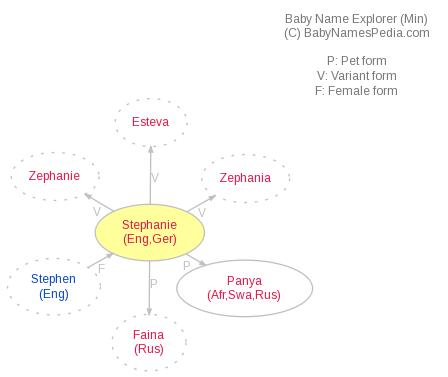