What does Steve mean?

[ 1 syll. (s)te-ve, st-eve ] The baby boy name Steve is pronounced as STiy-V †. Steve is used mostly in English and its language of origin is Old Greek. Steve is a shortening (English) of the Dutch and English name Steven as well as a familiar form of the English name Stephen.

Steve is an unusual baby boy name. Its usage peaked in 1959 with 0.511% of baby boys being named Steve. It was #41 in rank then. The baby name has experienced a steep fall in frequency since then, and is currently of irregular use. In 2018, among the family of boy names directly related to Steve, Steven was the most commonly used. 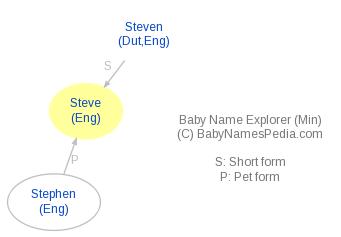