What does Susanna mean?

[ 3 syll. su-san-na, sus-a-nna ] The baby girl name Susanna is pronounced in English as Suw-ZAEN-ah †. Susanna is largely used in the English, German, and Italian languages. It is derived from Hebrew origins. A biblical name, it is derived from the words 'shoshan' meaning lily ; 'sheshen' water lily. Shoshannah (Hebrew) and Sousanna (Old Greek) are original forms of Susanna. The Hebrew element 'shoshan' is ultimately of Egyptian origin; as a modern word it means 'rose'. The name was borne in the Bible by Susannah, the wife of Joachim who was wrongly accused of adultery in the Apocrypha. The name was popular in medieval times; it was first adopted by English speakers in the 13th century.

Susanna is a variant transcription of the name Suzanne (English, French, and Dutch).

Susanna is unusual as a baby girl name. Its usage peaked modestly in 1972 with 0.017% of baby girls being given the name Susanna. It was #600 in rank then. The baby name has markedly declined in popularity since then, and is now of irregular use. Among the family of girl names directly linked to Susanna, Chana was the most commonly used in 2018. 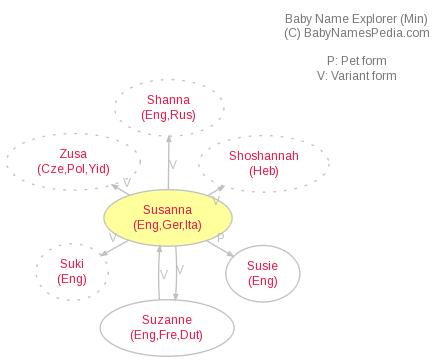