What does Talia mean?

[ 2 syll. ta-lia, tal-ia ] The baby girl name Talia is also used as a boy name, though it is far more popular for girls. It is pronounced as TAA-LYaa- †. Talia has its origins in the Latin, Hebrew, and Old Greek languages. It is used largely in English, Spanish, Arabic, and Hebrew. From Hebrew roots, its meaning is 'dew from God' - in this context, Talia can be used in the Arabic and Hebrew languages. It is derived from the word tal with the meaning 'dew'.

In addition, Talia is an English and Spanish shortening of the English, French, and German Natalie.

Talia is also an English spelling variant of the English and Hebrew Thalia.

Talia is the feminine equivalent of the English and Hebrew Tal.

What are the Variant Forms of Talia?

Talia is rather popular as a baby girl name. The name has been growing in popularity since the 1970s; prior to that, it was of only very light use. Its usage peaked modestly in 2015 with 0.058% of baby girls being named Talia. It was #284 in rank then. In 2018, it ranked at #333 with a usage of 0.053%, and it was the 2nd most popular after Natalie, among all girl names in its family. It was 5 times more popular than Talia in 2018. Talia has primarily been a baby girl name in the last century. 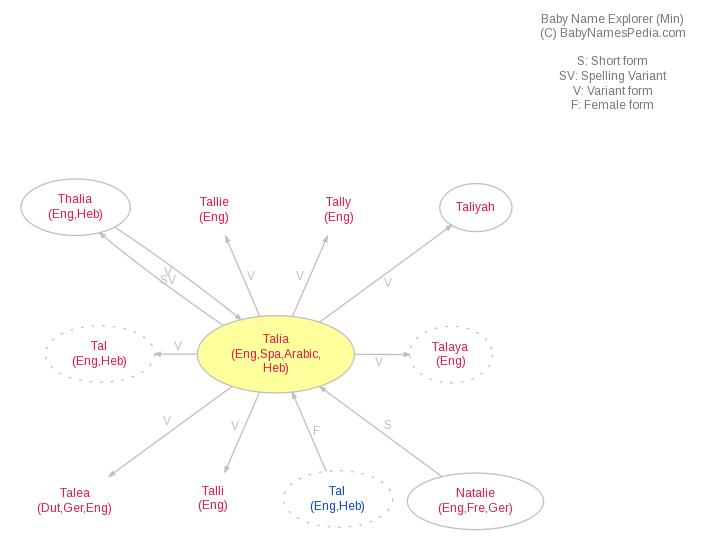