What does Tamar mean?

[ 2 syll. ta-mar, tam-ar ] The baby girl name Tamar is also used as a boy name. It is pronounced in English as TAA-MaaR or TEY-MaaR †. Tamar is of Hebrew origin. It is used mainly in Armenian, English, Hebrew, and Turkish. It is a biblical name derived literally from the word tamar with the meaning 'date palm, palm tree'. Original forms of the name include Tamar (Hebrew) and Thamar (Hebrew). This was a place name mentioned by Ezekiel in the Old Testament; the place has sometimes been equated with Tadmor. Three characters also bore the name, including a daughter-in-law of Judah and a beautiful daughter of King David and the full sister of Absalom. She was raped by her half-brother Amnon, for which Absalom killed him. This story was the basis for Tamar and Other Poems (1925) by Robinson Jeffers. Absalom later named his own daughter Tamar; the latter was an influential biblical character famed for her 'fair countenance', thus promoting the popularity of the name among Puritans in the 17th century.

In addition, Tamar is a shortening of Tamara in the Hebrew language.

What are the Variant Forms of Tamar?

Tamar is not often used as a baby girl name. It is not in the top 1000 names. Among the family of girl names directly related to Tamar, Mara was the most widely used in 2018. 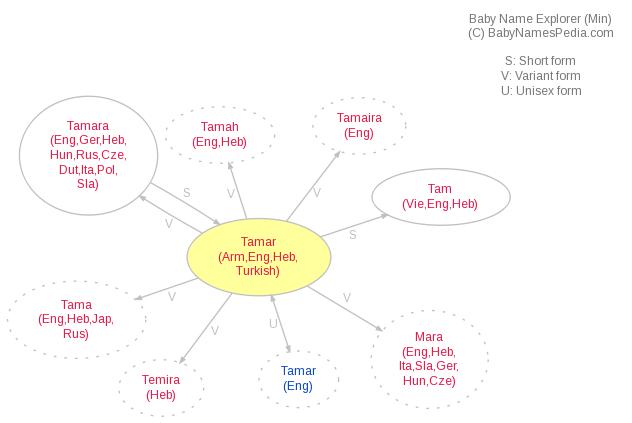