What does Tamara mean?

Tamara has its origins in the Hebrew language, and it is used largely in Czech, Dutch, English, Hebrew, Italian, Polish, Russian, and Slavic. Tamara or Thamar was a successful 12th-century Queen of Georgia in Russia whose fame helped spread the name across the country. The queen was the basis for Mikhail Lermontov's 19th-century poem Tamara, which described the queen as lustful and of a demonic spirit. The poem in turn was the basis for the orchestral poem and ballet Tamara (1861) by the Russian composer Mily Balakirev. The name was subsequently introduced to English speakers by Russian performers such as Tamara Karsavina (1885-1978), Tamara Drasin (1905-1943), and Tamara Geva (1907-1997). Other bearers include the American ballerina of Polish and Armenian descent Tamara Toumanova (1919-1996), and the Polish artist and glamour star Tamara de Lempicka (1898-1980). Elsewhere in literature, Shakespeare used the form Tamora for the Queen of the Goths in his play Titus Andronicus (1590-1594).

What are the Variant Forms of Tamara?

Tamary (Polish), Tamrin (Hebrew), Temma (Hebrew), and Thamar (Hebrew) are variant transcriptions of Tamara that are used in foreign languages.

Variant forms inherit both the origin and meaning of Tamara.

Tamara's language of origin is Sanskrit. It is derived from the element tamara which means 'spice'.

Tamara is unusual as a baby name for girls. Its usage peaked modestly in 1974 with 0.289% of baby girls being given the name Tamara. Its ranking then was #63. The baby name has since dropped out of favor, and is of only sporadic use now. Among all girl names in its group, Tamara was nonetheless the most regularly used in 2018. 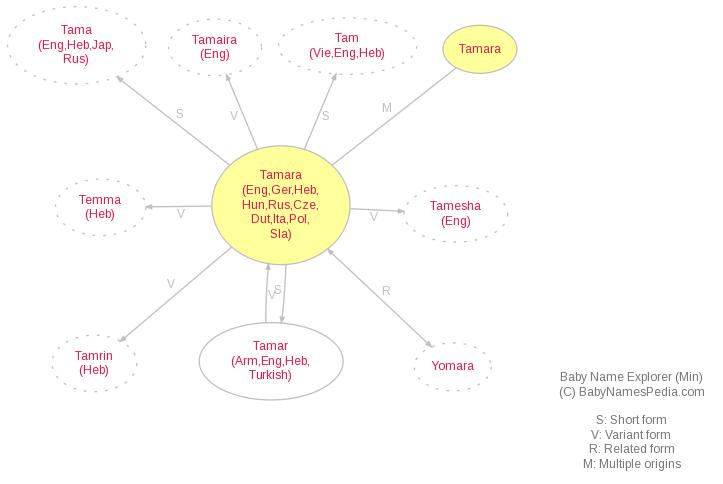