What does Tamera mean?

[ 3 syll. ta-me-ra, tam-era ] The baby girl name Tamera is pronounced as TAA-Miy-Raa- †. Tamera is used mostly in the English language and it is of Hebrew origin.

Tamera is a derivative (English) of the Armenian, English, Hebrew, and Turkish name Tamar.

Tamera is also a variant spelling (English) of Tamara.

Tamera is uncommon as a baby girl name. At the modest height of its usage in 1964, 0.030% of baby girls were given the name Tamera. It had a ranking of #403 then. The baby name has substantially declined in popularity since then, and is currently used on a very light scale. Within all girl names in its family, Tamera was nonetheless the most widely used in 2018. 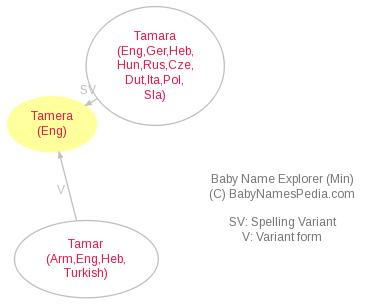