[ syll. ta-mya, tam-ya ] The baby girl name Tamya is pronounced as TAEMiyAH †. Tamya is primarily used in English and its language of origin is Hebrew.

Tamya is a form of the Armenian, English, Hebrew, and Turkish name Tamar.

Tamya is also an English form of Tamara.

Tamya is an unusual baby girl name. Its usage peaked modestly in 2003 with 0.013% of baby girls being named Tamya. It was #910 in rank then. The baby name has fallen from favor since then, and is now used on a very light scale. Among all girl names in its family, Tamya was nevertheless the most frequently used in 2018. 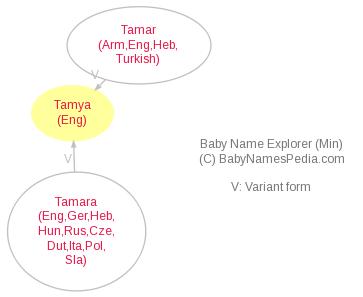