What does Tani mean?

Tani is of African-Hausa origin and it is used mainly in Hausa. The meaning of Tani is 'born on Monday'. It is derived from the word litinin with the meaning 'Monday'. The name is from the Hausa people in West Africa, who typically bestow names reflecting aspects of a birth.

Tani has 13 forms that are used in English and foreign languages. English forms of the name include Tanea, Tanee, Taney, Tanie, Tannea, Tannee, Tanney, Tanni, Tannie, Tanny, Tany, and Tanye. The Hausa Tanisha is a form of Tani that is used in foreign languages.

Tani is of Japanese origin. Here, the meaning is 'valley'.

Tani is a form of the Hausa and English Tanisha in the English language.

Tani is also a form of the name Tani.

Tani is also a form of Tatiana.

Tani is not often used as a baby girl name. It is not in the top 1000 names. Within the family of girl names directly related to Tani, Tatiana was the most regularly used in 2018. 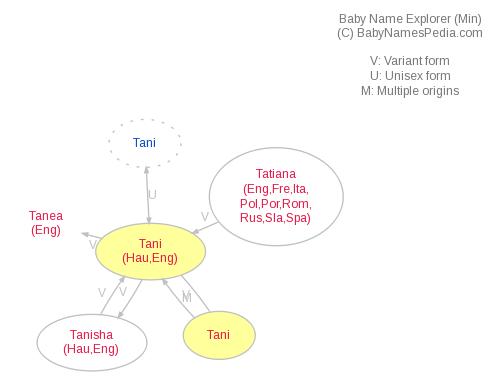