What does Tatiana mean?

[ 4 syll. ta-tia-na, tat-i-ana ] The baby girl name Tatiana is pronounced Tae-Tiy-AEN-ah or Tae-TYAEN-ah (English) or Taa-TYAA-Naa (Italian, Polish, Russian, Spanish) †. Tatiana is of Latin origin. It is used mainly in English, French, Italian, Polish, Portuguese, Romanian, Russian, Slavic, and Spanish. The meaning of Tatiana is 'from the house of Tatius'. An old form of the name is Tatiana (Latin). The name is of uncertain origin; it could ultimately be of the Latin tata. The name was borne by a 3rd-century Roman Christian saint martyred under Severus; she was particularly venerated by the Eastern Church, thus popularizing the name throughout Eastern Europe and Russia. English speakers started to adopt the name on a regular basis only in the late 20th century. The name was also borne by the Grand Duchess Tatiana of Russia (1897-1918), the second daughter of Tsar Nicholas II. In literature, the name has appeared in the altered form Titania in Shakespeare's play A Midsummer Night's Dream (1594-1596), and as Tatiana Larina in Pushkin's novel Eugene Onegin (1825-32). Tatiana is the feminine version of the Italian Taziano.

Tatiana is rather popular as a baby girl name. The name increased in popularity from the 1970s up to the 1990s; prior to that, it was of only infrequent use. At the modest peak of its usage in 1999, 0.075% of baby girls were named Tatiana. It was #213 in rank then. The baby name has experienced a drop in popularity since then. In 2018, it ranked at #696 with a usage of 0.022%. Out of the family of girl names directly related to Tatiana, Tiana was the most regularly used. It was 7.589% more regularly used than Tatiana in 2018. 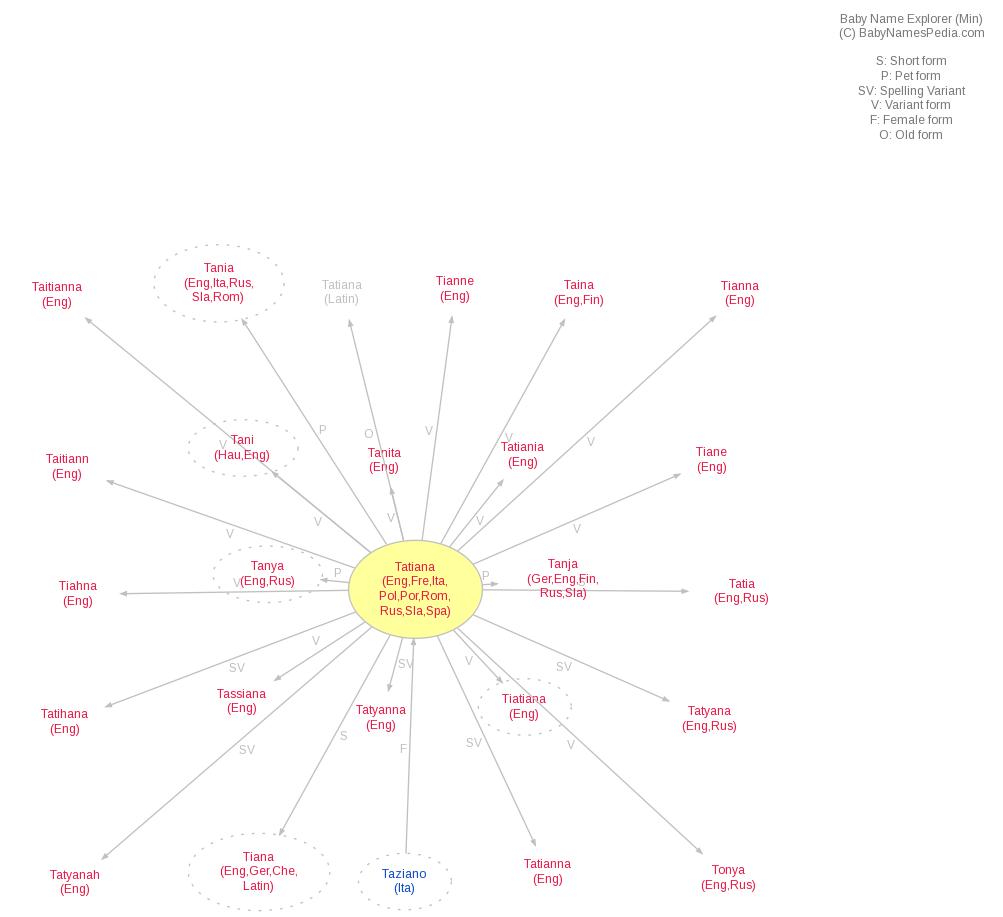