What does Taylor mean?

[ 2 syll. tay-lor, ta-yl-or ] The baby boy name Taylor is also used as a girl name, and more frequently so. It is pronounced as TEY-LaoR †. Taylor is used predominantly in the English language and it is derived from Old French origins. The first name is derived from the surname, itself originally from the job title for one who works as a tailor, of the Old French 'taillour' and the Late Latin 'tlere'. The name was borne by the English poet Samuel Taylor Coleridge (1772-1834). See Taylor for more information.

Taylor is a classic favorite. Today it is still fairly popular as a baby name for boys, though not to the extent it was in the past. The name's popularity rose from the 1950s up to the 1990s. Its usage peaked modestly in 1992 with 0.393% of baby boys being given the name Taylor. It ranked at #52 then. The baby name has since experienced a marked loss in popularity. In 2018, its usage was only 0.028% and its ranking #529, but it was nonetheless the most commonly used among all boy names in its group. Though Taylor is more popular as a girl name today, there was a period before 1989 that it was given more often to boys. From 1990 on, increasingly more girls than boys were named Taylor. In 2017, the name Taylor was given to 5 times as many girls than boys. 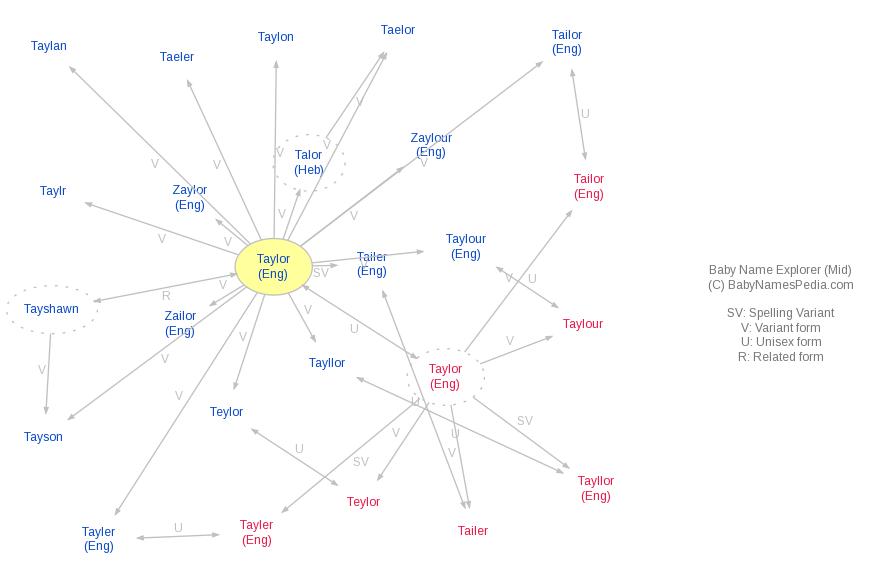