[ syll. ta-zia-no, taz-i-ano ] The baby boy name Taziano is pronounced as TAHZiyAANow †. Taziano is used predominantly in the Italian language and it is derived from Latin origins. The name is of the meaning from the house of Tatius. The first name is derived from the Roman given name Tatianus (Latin). The latter is itself from the family name Tatius (Latin) which is of unknown meaning, possibly the Latin element and baby word 'tata'. The name was borne by Titus Tatius (-748 BC), a Sabine king who attacked Rome after the Romans first captured the Sabine women; he eventually ruled over the Romans and the Sabines jointly with Romulus after the intervention of the Sabine women. There were also several early saints named Tatianus. The name Tatiana (English, French, Italian, Polish, Portuguese, Romanian, Russian, Slavic, and Spanish) is the female version of Taziano.

The name Tazio (Italian) is a variant of Taziano.

Taziano is an infrequently used baby name for boys. It is listed outside of the top 1000 names. 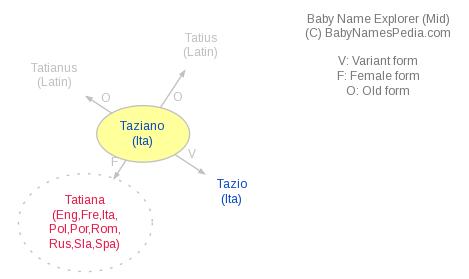