What does Teresa mean?

[ 3 syll. te-re-sa, ter-esa ] The baby girl name Teresa is pronounced in English as Tah-RIY-Sah, in German as Teh-REH-Zaa, or in Italian, Polish and Spanish as Teh-REH-Saa †. Teresa is used predominantly in the English, Italian, and Spanish languages. Its origin is Old Greek. Teresa is a variant spelling of the name Theresa (English and German).

Teresa is a classic favorite. Today it is still somewhat popular as a baby girl name, but to a lesser degree than it was in the past. Its usage peaked in 1962 with 0.913% of baby girls being given the name Teresa. It was #18 in rank then. The baby name has experienced a substantial loss in popularity since then, and is currently of modest use. In 2018, its usage was only 0.018% and its ranking #798, but it was nonetheless the most frequently used among all girl names in its family. 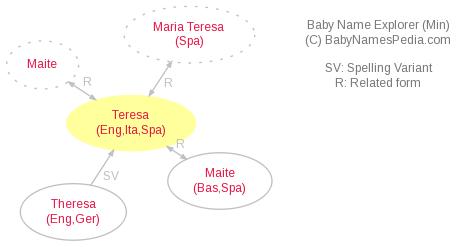