What does Terry mean?

[ 2 syll. ter-ry, te-rry ] The baby boy name Terry is also used as a girl name, but it is much more common for boys. Its pronunciation is TEY-R-iy- †. Terry is largely used in the English language, and its origin is Latin, Old French, Old Greek, and Gothic. From Old French roots, its meaning is ruler of the people. The first name is derived from the English surname, which is itself from the forms Thierri (Old French) or Tierri (Old French) introduced by Normans into England. The Norman French forms are themselves from Theodric, the Old English form of Theodoric.

Terry is an English pet form of the name Terence (English and German).

Terry is also an English pet form of the name Theodore (English, French, and Greek).

Terry is also a variant of the name Theodoric (English).

Terry is also a variant of the name Tyrrell (English).

Other forms of Terry include the short form Tel (English), and the variant spellings Terri (English) and Terrie (English).

Terry is a classic favorite. Currently it is still somewhat popular as a baby name for boys, though it was in more widespread use previously. The name's popularity rose from the 1910s up to the 1950s. At the height of its usage in 1954, 0.751% of baby boys were given the name Terry. Its ranking then was #27. The baby name has since experienced a substantial fall in popularity. In 2018, its usage was only 0.016% and its ranking #757. Within the group of boy names directly linked to Terry, Theodore was the most commonly used. In 2018, its use outnumbered Terry's by 23 times. Terry has predominantly been a baby boy name in the past century. In 1987, 11 times as many baby boys than girls were given the name Terry. 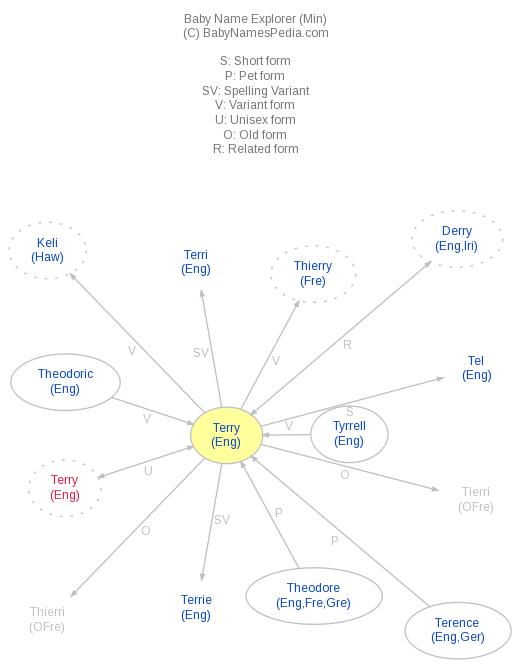