What does Teuta mean?

[ syll. teu-ta, te-uta ] The baby girl name Teuta is pronounced as T-OYTAH †. Teuta's origin and use are both in the Albanian language. An old form of Teuta is Tefta (Albanian). The name was borne by Teuta or Tefta of Issa, a 3rd century Illyrian queen and ancestor of the Albanian people.

The Albanian name Teutë is a variant form of Teuta.

Variant forms share the origin and meaning of the name Teuta.

Teuta is an infrequently used baby name for girls. It is not ranked within the top 1000 names. 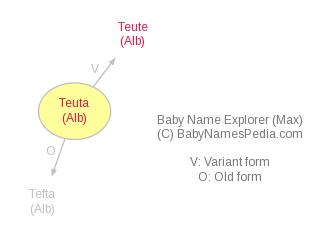