What does Theo mean?

[ 2 syll. (t)heo, th-eo ] The baby boy name Theo is sometimes used as a girl name. Its pronunciation is -THIY-ow (English) or TEY-ow (Dutch) †. Theo is used predominantly in the English, Dutch, German, and Scandinavian languages, and its origin is Germanic and Old Greek.

Theo is a short form (English) of the name Theobald (English and German).

Theo is also a short form (Dutch, English, German, and Scandinavian) of the name Theophil (German).

Teo (German variant spelling) is a form of Theo.

Theo is popular as a baby name for boys, and it is also considered trendy. The name's popularity has been rising since the 2000s. At the modest peak of its usage in 2018, 0.080% of baby boys were given the name Theo. Its ranking then was #243. In 2018, out of the group of boy names directly linked to Theo, Theodore was the most widely used. Its use outnumbered Theo's by 5 times in that year. There were times from 1918 to 1924 that the name Theo was given more often to girls, but it is slightly more popular as a baby boy name today. In 1929, 8.065% more baby boys than girls were given the name Theo. 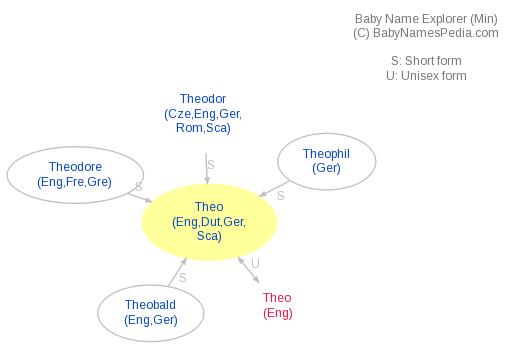