What does Theobald mean?

[ 3 syll. (t)heo-bal(d), th-eoba-ld ] The baby boy name Theobald is pronounced -DHIY-owBaoLD †. Theobald's language of origin is Germanic. It is predominantly used in the English and German languages. Dietbald (Germanic), Theodbald (Old English), and Theudobald (Germanic and Latinized) are older forms of Theobald. The name is derived from the Germanic theud (meaning 'people, race') and bald ('bold, brave') under the influence of the Greek theos. The Latinized form was recorded in the 11th century Domesday Book. The name was borne by Theobald of Bec (-1161), an archbishop of Canterbury; he was of Norman origin. Medieval forms of the name include Tebald, Tedbald, Tibert, and Tybalt. The form Tybalt or Tibert was known as the name of the cat in the French folklore Reynard the Fox, thus giving rise to the nicknames Tibs and Tibby being used for cats. The form Tybalt was later used by Shakespeare for the name of Juliet's cousin in Romeo and Juliet (1595).

Theobald is an irregularly used baby boy name. It is not listed in the top 1000. In 2018, within the family of boy names directly linked to Theobald, Theo was the most widely used. 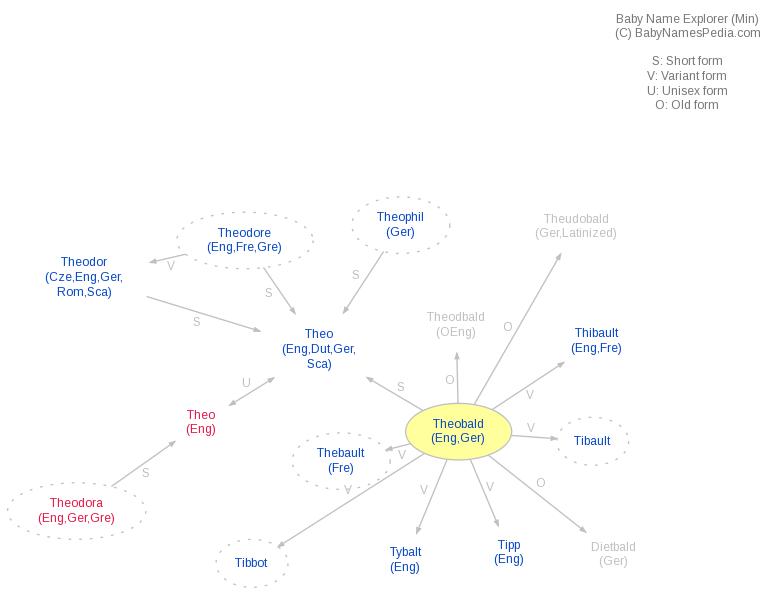