What does Theodosia mean?

[ 5 syll. (t)heo-do-sia, th-eodos-ia ] The baby girl name Theodosia is pronounced -DHiy-owDOWZ-iy-aa- or -DHiy-owDOW-Z-ah- †. Theodosia's language of origin is Old Greek. It is predominantly used in English and Greek. The name Theodosia means 'giving to god'. It is derived from theos meaning 'god' ; dosis 'giving'. An older form of the name is Theodosia (Old Greek). The name was borne by various early saints and martyrs. In literature, the name has appeared in the William Makepeace Thackeray novel The Virginians (1857-1859).

In addition, Theodosia is a form of the English, German, and Greek Theodora.

Theodosia is the feminine equivalent of the Greek Theodosios.

The contracted forms Docia (English), Dosia (English), Thea (German), and Theda (English, German, and Scandinavian) are other variants of the name.

Theodosia is an uncommon baby girl name. It is not in the top 1000 names. In 2018, within the family of girl names directly related to Theodosia, Thea was the most frequently used. 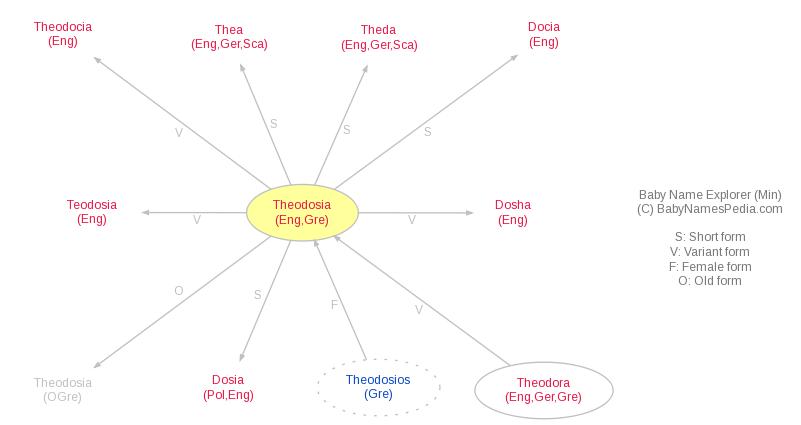