What does Theodosios mean?

[ 5 syll. (t)heo-do-sios, th-eodosi-os ] The baby boy name Theodosios is pronounced as -THeh-owDUWSiy-aaS †. Theodosios is used chiefly in the Greek language and it is derived from Old Greek origins. The name's meaning is giving to god. It is derived from the elements 'theos' meaning god ; 'dosis' giving. Theodosius (Old Greek) is an older form of Theodosios. The name was borne by several emperors of ancient Rome and Byzantium, as well as an 11th-century Russian saint.

In addition, Theodosios is a variant of the name Theodore (English, French, and Greek).

The name Theodosia (English and Greek) is the female form of Theodosios.

Fedya (Russian diminutive form) is another variant of Theodosios.

Theodosios is infrequently used as a baby name for boys. It is not listed in the top 1000 names. Within the group of boy names directly linked to Theodosios, Theodore was the most popular in 2018. 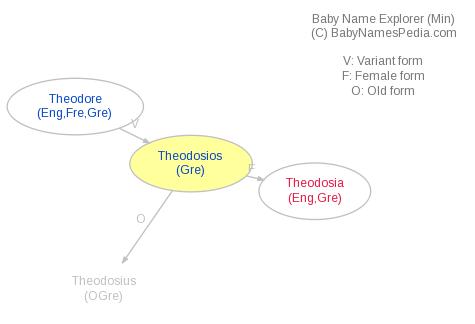