What does Theophil mean?

[ syll. (t)heo-(p)hil, th-eoph-il ] The baby boy name Theophil is pronounced as -THiyAHF-IHL †. Theophil is largely used in the German language and its origin is Old Greek. The name is of the meaning friend of god; loved by god; one who loves god. A biblical name, it is derived from the elements 'theos' meaning god ; 'philos' friend. Theophilos (Old Greek) and Theophilus (Latinized) are older forms of Theophil. The name was popular among early Christians due to its well-omened meaning. In the New Testament of the Bible, Luke addressed his gospel and the Book of Acts to a person named Theophilus. The name was also borne by a 2nd-century Bishop of Antioch and the 9th-century Saint Theophilus of Nicomedia, and it was later adopted by English Puritans in the 16th century. The name Teofila (Italian and Polish) is the female equivalent of Theophil.

Theo (Dutch, English, German, and Scandinavian short form) is another variant of Theophil.

Theophil is infrequently used as a baby name for boys. It is not listed in the top 1000 names. In 2018, within the group of boy names directly linked to Theophil, Theo was the most popular.

A baby name that sounds like Theophil is the name Tzviel (Hebrew). 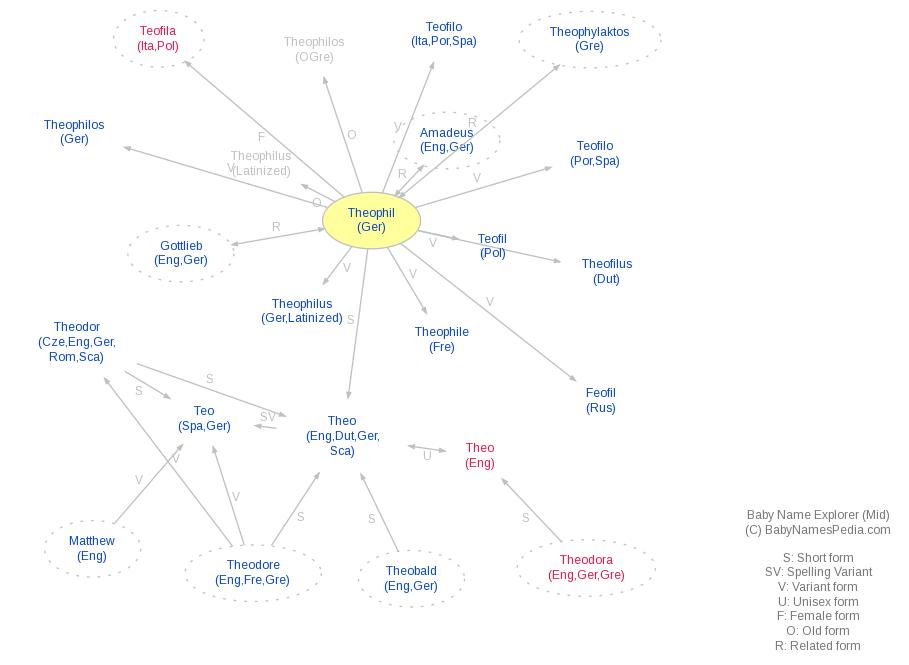