What does Theresa mean?

[ 3 syll. (t)he-re-sa, th-er-esa ] The baby girl name Theresa is pronounced Tah-REY-Zah or Tah-RIY-Sah in English or Teh-REH-Zaa in German †. Theresa's language of origin is Old Greek. It is predominantly used in English and German. The meaning of Theresa is 'hunter; harvest; guardian; woman from Therasia'. The name is of uncertain origin. It was first adopted in Spain and Portugal, where it was known in the 5th century from Saint Paulinus of Nola's wife, a Spanish woman named Therasia; she was supposed to have been born on the Greek island Thera, known today as Santorini. The island name could be derived from the Old Greek ther (meaning 'animal, game'), or else from other Greek words meaning 'harvest' or 'guardian'. Therasia is also the name of a small island to the west of Santorini, separated by an eruption; the first name is thus sometimes taken to mean 'woman from Therasia'.

The first name was later borne by Saint Teresa of Avila (1515-1582), a prominent Spanish mystic and Carmelite nun, and Saint Thérèse de Lisieux (1873-1897), a Carmelite nun also recognized as a Doctor of the Church by the Roman Catholics; the name was thus popular among Roman Catholics in medieval times. English speakers took up the name in the 18th century, by when the Catholic association had been largely diminished. The first name is today well-known from Mother Teresa of Calcutta (Agnes Gonxha Bojaxhiu; 1910-1997), a Roman Catholic nun born in Albania and residing in India. Theresa is the feminine version of the Italian Teresio.

What are the Variant Forms of Theresa?

Theresa is an uncommon baby girl name. At the height of its usage in 1961, 0.577% of baby girls were named Theresa. It was #35 in rank then. The baby name has steeply slipped in popularity since then, and is currently used only on a very light scale. In 2018, within the family of girl names directly related to Theresa, Tessa was the most popular. 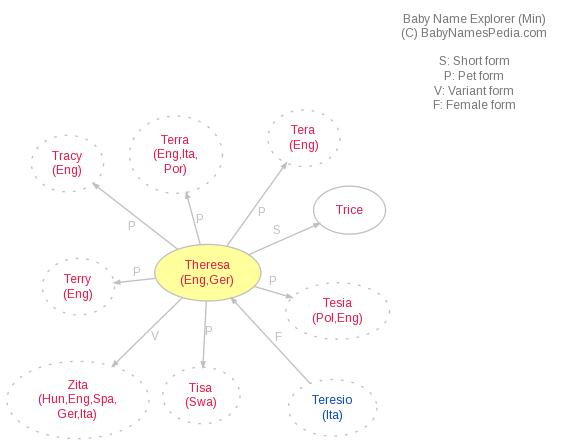