What does Thomas mean?

[ 2 syll. (t)ho-mas, th-om-as ] The baby boy name Thomas is pronounced as TAAM-ahS or TOWM-ahS (English), TOW-MaaS (Dutch, German), Tow-MAE (French), or -THow-MAAS (Greek) †. Thomas is used chiefly in the Dutch, English, French, German, and Scandinavian languages, and it is derived from Aramaic origins. A biblical name, it is from the element 'teoma' meaning twin. The name is derived via Didymos (Old Greek) from the byname Teoma (Aramaic). The name was borne by several characters in the Bible, notably the apostle Thomas who had a twin brother; he was originally called Judas but was given a new name to distinguish him from Judas Iscariot.

The name was in medieval times often given to Christians in honor of the apostle. It was borne by a number of saints, including Saint Thomas Becket (1118-1170), the archbishop of Canterbury martyred under King Henry II, the philosopher and theologian Saint Thomas Aquinas (1225-1274), and Saint Thomas More, an English humanist scholar martyred for opposing King Henry VIII. The commonality of the name is reflected in the use of the phrase 'Tom, Dick and Harry' as a reference for anyone. The name Tommy is also used as a generic name for British soldiers, commonly believed to originate from Private Thomas Atkins, a brave solider at the Battle of Boxtel in 1794 whose death was witnessed by the Duke of Wellington. The name Thomasina (English) is the female form of Thomas.

What are the Variant Forms of Thomas?

Thomas is a classic favorite. At present it is still very popular as a baby name for boys, though to a lesser extent than it was before. At the peak of its usage in 1951, 2.526% of baby boys were given the name Thomas. Its ranking then was #8. The baby name has since fallen in popularity, and is in recent years of occasional use. In 2018, its usage was only 0.351% and its ranking #49, but it was nonetheless the most popular out of all boy names in its group. In 2018, Thomas was more commonly used than the next most popular name, Tomas, by 20 times. Thomas has predominantly been a baby boy name, though in the past century it has also been used for girls. In 1983, Thomas as a baby boy name outnumbered its use as a girl name by 115 times. 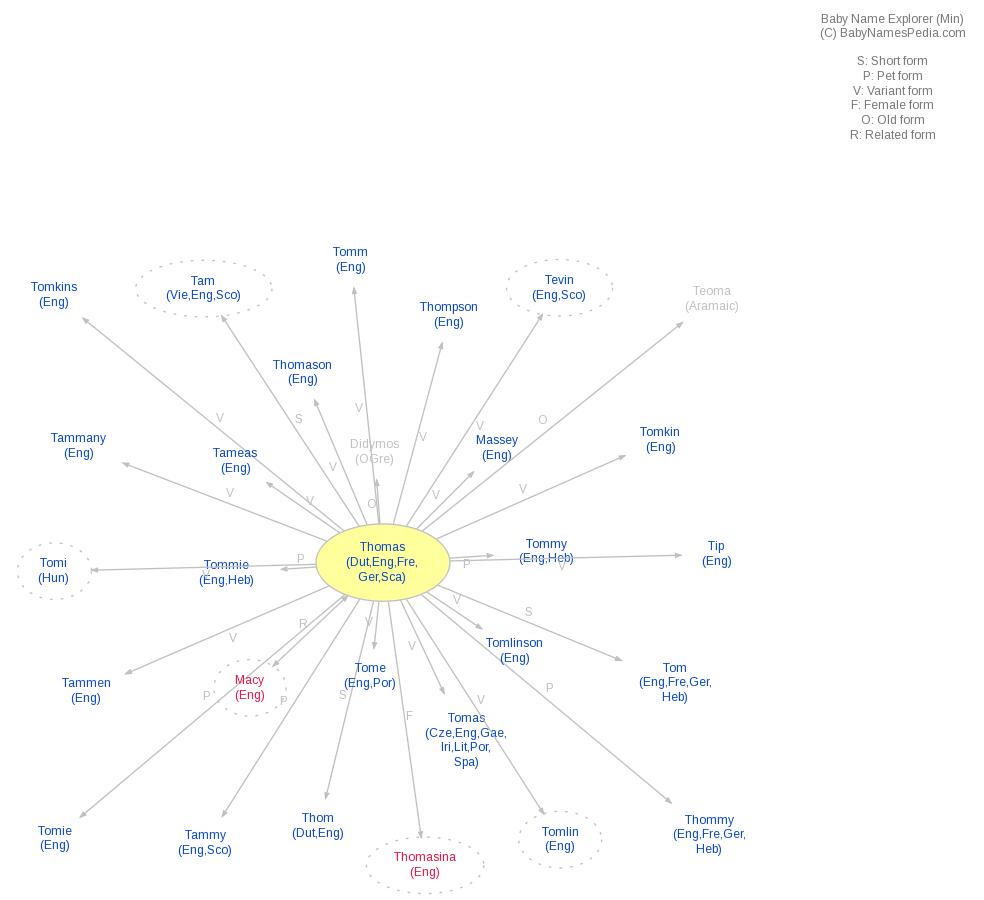