What does Tiana mean?

[ 3 syll. tia-na, ti-ana ] The baby girl name Tiana is pronounced as Tiy-AA-Naa- or Tiy-AEN-aa- †. Tiana is used chiefly in English, German, Cherokee, and Latin. Its origin is Latin and Indoeuropean.

Tiana is also a variant of Diana in the Cherokee language.

Tiana is also a shortening of Tatiana in the English and Latin languages.

Tiana is also a variant of the name Tia (English).

Tiana has 21 variants that are used in English and other languages. English variants of Tiana include Teana, Teanna, Teona, Tiahna, Tian, Tiane, Tiann, Tianna, Tianne, Tianni, Tiaon, Tiauna, Tiena, Tiona, Tiyana, Tyana, Tyanna, Tyanne, and Tyonna. Another English variant is the shortening Tia. A variant of the name used in other languages is Tiani (Greek).

Variant forms share the origin and meaning of Tiana.

Tiana is a rather popular baby girl name. The name's popularity grew from the 1970s up to the 1990s; before that, it was of infrequent use only. Its usage peaked modestly in 1995 with 0.053% of baby girls being named Tiana. It had a ranking of #267 then. The baby name has experienced a fall in popularity since then. In 2018, its usage was 0.024% and its ranking #660, but it was nevertheless the 3rd most popular after Diana and Christina, among all girl names in its family. In 2018, Diana was 4 times more popular than Tiana. 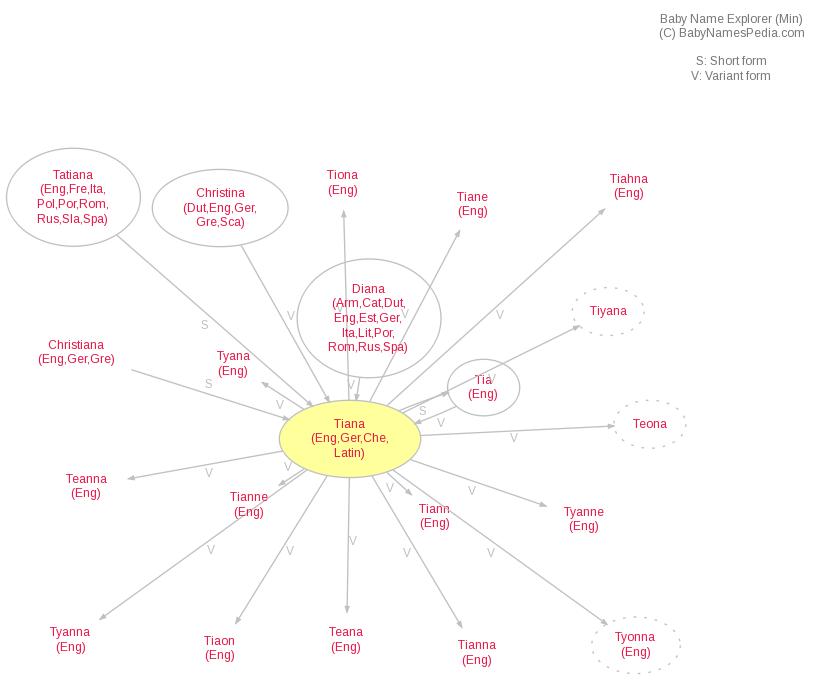