What does Tiernan mean?

[ 3 syll. tier-nan, ti-ern-an ] The baby boy name Tiernan is also used as a girl name. It is pronounced as TIHIYRNaeN †. Tiernan is largely used in the Irish language and it is derived from Celtic origins. It is derived from the elements 'tighearna' meaning lord ; 'tigern' lord. The name is Anglicized from Tighearnán, itself from 'tighearna' combined with a diminutive suffix. The name was borne by a 12th-century king of Breifne in Ireland.

Tiernan is an unusual baby name for boys. It is not listed in the top 1000 names. 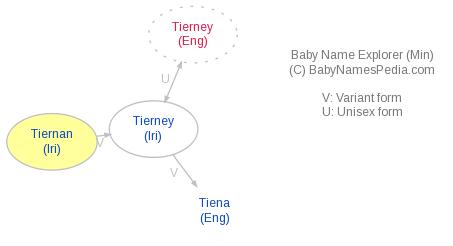