What does Tierney mean?

[ 3 syll. tier-ney, ti-ern-ey ] The baby boy name Tierney is also used as a girl name. Its pronunciation is TIHIYRNiy- †. Tierney is used predominantly in the Irish language and it is derived from Celtic origins. It is derived from the elements 'tighearna' meaning lord ; 'tigern' lord. The name is Anglicized from Tighearnach, which is itself from 'tighearna'. The name was borne by a 6th-century Irish saint who served as the abbot of Clones and later as the bishop of Clogher.

Tierney is a variant of the name Tiernan (Irish).

Tierney is rarely used as a baby name for boys. It is not listed in the top 1000 names. 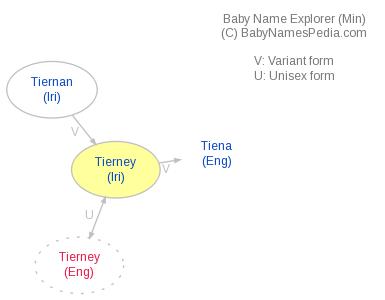