What does Tiffany mean?

[ 3 syll. tif-fa-ny, ti-ff-any ] The baby girl name Tiffany is pronounced as TIYF-aa-Niy- †. Tiffany is of Old Greek origin. It is used mainly in English and German. The meaning of Tiffany is 'manifestation of god'. It is a biblical name from theos which means 'god' ; phainein 'to show, to appear'. The name is derived via Tifaine (Old French) from Theophania (Old Greek). It was initially given to girls born on the Epiphany, a feast day on January 6 celebrating the appearance of God in human form as Jesus. It declined in use after the Middle Ages, but later saw a revival in the 20th century, promoted by the success of the film Breakfast at Tiffany's (1961) starring Audrey Hepburn, in reference to Tiffany, the famous New York jewellery shop.

What are the Variant Forms of Tiffany?

Tiffany is an all-time favorite. At present it is still rather popular as a baby girl name, but not as much as it was in the past. The name's popularity increased from the 1960s up to the 1980s; before that, it was of only infrequent use. Its usage peaked in 1988 with 0.956% of baby girls being named Tiffany. It was #13 in rank then. The baby name has markedly slipped in popularity since then. In 2018, it ranked at #690 with a usage of 0.023%, but it was nevertheless the most commonly used among all girl names in its family. Tiffany has primarily been a baby girl name, although in the last century it has also been used for boys. In 1989, 146 times as many baby girls than boys were given the name Tiffany. 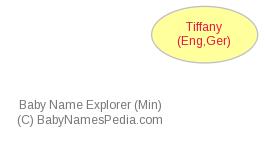