Till - Meaning of Till

What does Till mean?

[ 1 syll. til(l), ti-ll ] The baby boy name Till is pronounced TihL †. Till's language of origin is Gothic and Germanic, and it is used mainly in the English and German languages. Older forms of Till include Theau (Old French), Tielo (Germanic), and Tilloine (Old French). The name developed as a medieval pet form of Germanic names starting with 'Diet-'. Saint Tillo was a 7th-century Saxon who evangelized in the Low Countries; his cult was widespread in France and Belgium, where he was also known as Theau or Tilloine.

Till is an English and German form of the German, Romanian, and English Dietrich.

Till is also a short form of the English Theodoric.

Till has 17 forms that are used in English and foreign languages. Forms used in English include Thilo, Tille, Tillea, Tillee, Tilley, Tilli, Tillie, Tilly, Tilson, Tyl, and Tyll. The diminutive form Tillmann (also used in German) is another English variant. Foreign forms of Till include the Latinized Thelonious and the Latinized Thelonius. Specific foreign forms include the diminutive forms Tillman (German) and Tilman (German), and the variant spelling Til (German).

Variant forms inherit both the origin and meaning of the name Till.

Till is rarely used as a baby name for boys. It is not ranked within the top 1000 names.

More about famous people named Till: 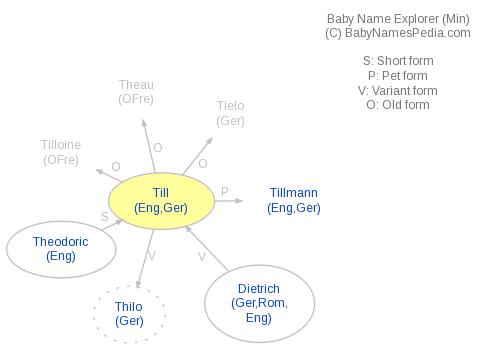