What does Tim mean?

[ 1 syll. tim, ti-m ] The baby boy name Tim is pronounced as TihM †. Tim has its origins in the Old Greek and Germanic languages. It is used largely in English, German, and Greek.

Tim is a derivative of the English Artemas.

Tim is also a derivative (German) of the Dutch and German Dietmar.

Tim is also a shortening (English, German, and Greek) of the English Timothy.

A form of the name is the German and English spelling variant Timm.

Tim is unusual as a baby boy name. Its usage peaked in 1960 with 0.320% of baby boys being named Tim. It was #60 in rank then. The baby name has substantially dropped in popularity since then, and is currently used only on a very modest scale. In 2018, among the family of boy names directly related to Tim, Timothy was the most widely used. 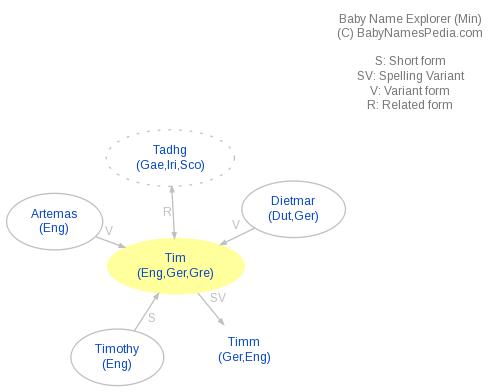