What does Tobias mean?

[ 3 syll. to-bias, tob-i-as ] The baby boy name Tobias is pronounced in English as Tah-BAY-ahS or in German as Tow-BIY-aaS †. Tobias is used chiefly in the English, German, and Scandinavian languages, and it is derived from Hebrew origins. The name's meaning is Yahweh is good. A biblical name, it is derived from the elements 'towb' meaning good ; 'yahweh' name of God. Tobiah (Hebrew), Tobias (Old Greek), and Tobiyah (Hebrew) are original forms of Tobias. The name Tobiyah was borne by various characters in the Bible; the '-iyah' ending was often represented by '-ias' in Greek. The name was also borne by Saint Tobias, a 4th-century martyr at Sebaste. In the Middle Ages, it was most famous from the tale of 'Tobias and the Angel' in the apocryphal Book of Tobit. It recounted how Tobias, accompanied by his dog, met the archangel Raphael and through the latter's help, eventually collected a debt for his father Tobit, won himself a wife, and also cured his father's blindness. The name Tobias has traditionally been popular among Jews; among English speakers it was commonly adopted only after the Reformation. The name Tovia (Hebrew) is the female form of Tobias.

Tobias is popular as a baby name for boys, and it is also considered trendy. The name's popularity has been growing since the 1960s. Its usage peaked modestly in 2016 with 0.075% of baby boys being given the name Tobias. It ranked at #246 then. In 2018, its usage was 0.066% and its ranking #275, and it was the most popular among all boy names in its group. In 2018, 5 times more boys were named Tobias than the subsequent ranked name, Toby. 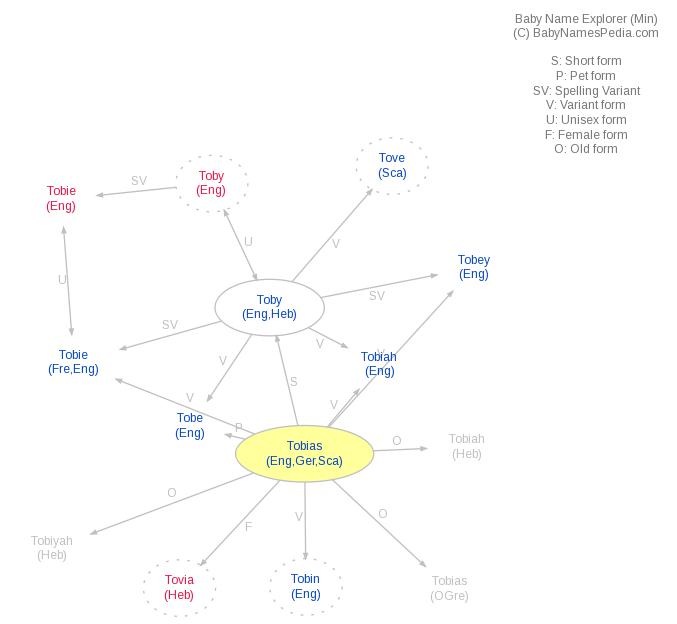