What does Toby mean?

[ 2 syll. to-by, tob-y ] The baby boy name Toby is sometimes used as a girl name. It is pronounced as TOW-Biy- †. Toby is largely used in the English and Hebrew languages, and it is derived from Hebrew origins. The name Toby is a vernacular form of Tobias. The story of Tobias from the apocryphal Book of Tobit was highly romanticized in the medieval period, and in many paintings Tobias was featured with his pet dog; this led to the name Toby being associated with dogs. The association has since the 17th century been further promoted by the traditional English puppet show Punch and Judy, which has featured a popular bull terrier character named Toby in reference to the apocryphal tale. The name has also been made known by one of Shakespeare's finest comic characters Toby Belch in the play Twelfth Night (1601), and by the gentle Uncle Toby in the Laurence Sterne novel Tristram Shandy (1759). See Toby for more information.

Toby is an English and Hebrew short form of the name Tobias (English, German, and Scandinavian).

Toby is a classic favorite. Currently it is still somewhat popular as a baby name for boys, though to a lesser extent than it was in the past. The name's popularity rose from the 1930s up to the 1970s. Its usage peaked modestly in 1975 with 0.074% of baby boys being given the name Toby. Its ranking then was #190. The baby name has since fallen in popularity. In 2018, its usage was only 0.014% and its ranking #842. Among the group of boy names directly linked to Toby, Tobias was the most regularly used. In 2018, its use outnumbered Toby's by 5 times. There were times from 1921 to 1945 that the name Toby was given more often to girls, but it is more popular as a baby boy name today. In 1975, 7 times as many baby boys than girls were given the name Toby. 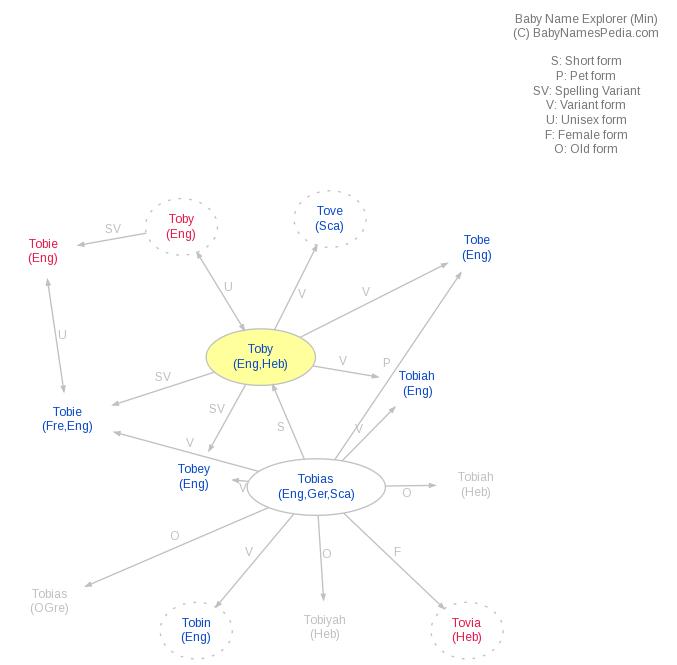