[ 2 syll. toy-ka, to-yka ] The baby girl name Toyka is pronounced as TOY-Kah †. Toyka is used predominantly in the English language and its origin is Latin. Toyka was first used in America as the name of a guest character in the TV series Route 66 (1960s).

In addition, Toyka is a diminutive (English) of the name Victoria (English, German, Romanian, and Spanish).

The origin and meaning of Toyka is inherited by all variant forms.

Toyka is unusual as a baby girl name. It is not listed in the top 1000. Among the family of girl names directly linked to Toyka, Victoria was the most frequently used in 2018. 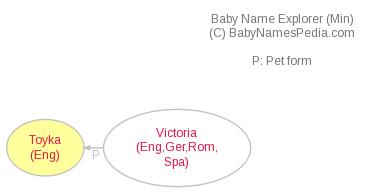