What does Trevon mean?

[ 2 syll. tre-von, tr-ev-on ] The baby boy name Trevon is also used as a girl name, but it is much more common for boys. It is pronounced as TRiy-VAE-N †.

Trevon is largely used in the English language and it is derived from Cornish origins. The first name is of obscure origin; it could be derived from the Cornish surname, which has itself been recorded in early forms such as Trevan, Trevain, Trevane, and Treven. The surname is from the place name of the village of Trevone near Padstow. The village name, also recorded in the Cornish rolls (1302) as Treavon, means 'settlement by the water' from the elements 'tref' (meaning village, settlement, homestead) and 'avon'.

What are the Variant Forms of Trevon?

Trevon's language of origin is English-American. The name is derived from the combination of Trey and Von.

Trevon is a rare baby name for boys. At the modest peak of its usage in 1997, 0.043% of baby boys were given the name Trevon. Its ranking then was #312. The baby name has since fallen from favor, and is now of irregular use. Out of all boy names in its group, Trevon was nonetheless the most popular in 2018. 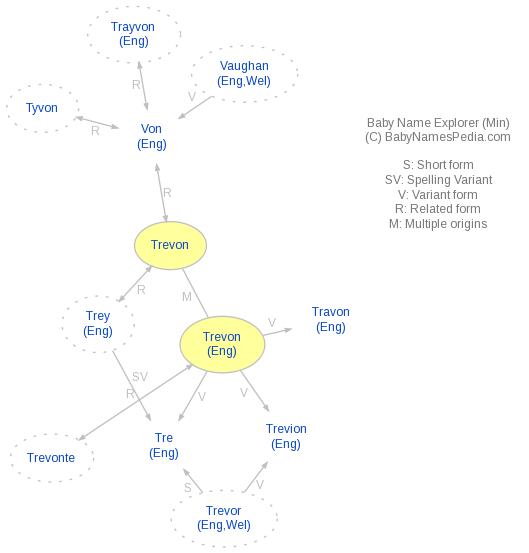