What does Trinity mean?

[ 3 syll. tri-ni-ty, tr-in-ity ] The baby girl name Trinity is also used as a boy name, though it is more frequently a girl name. It is pronounced as TRIHN-ihT-iy- †. Trinity is of English origin and it is also used mainly in English. The first name is derived from the Christian doctrine of God existing as three persons, the Father, Son, and Holy Spirit; the word trinity is itself derived from the Latin trinitas.

Trinity is popular as a baby girl name. The name increased in popularity from the 1990s up to the 2000s. Its usage peaked modestly in 2004 with 0.280% of baby girls being named Trinity. It was #48 in rank then. The baby name has experienced a decline in popularity since then. In 2018, it ranked at #168 with a usage of 0.092%, but it was nevertheless the most widely used among all girl names in its family. Though there were times from 1980 to 1980 when more boys than baby girls were given the name Trinity, the name is today more frequently used for baby girls. In 1979, 64% more baby girls than boys were given the name Trinity. 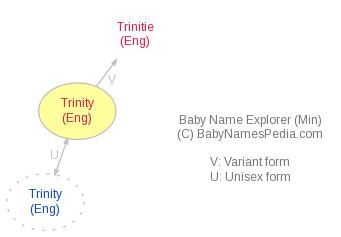