What does Trisha mean?

[ 2 syll. tris-ha, tr-i-sha ] The baby girl name Trisha is pronounced as TRIH-SH-aa- †. Trisha is an English and Latin name of Latin and Sanskrit origin. From Sanskrit roots, its meaning is thirst - in this context, Trisha can be used in the English language.

In addition, Trisha is a diminutive form (English and Latin) of the English, Portuguese, and Spanish name Patricia.

Trisha is rare as a baby name for girls. At the modest peak of its usage in 1979, 0.103% of baby girls were given the name Trisha. It ranked at #159 then. The baby name has since suffered a marked fall in frequency, and is currently used on a very light scale. Out of the group of girl names directly linked to Trisha, Patricia was the most frequently used in 2018. 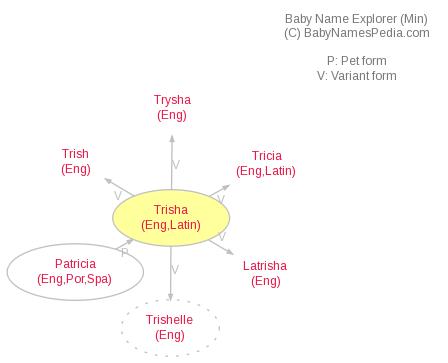