What does Tristan mean?

[ 2 syll. tris-tan, tr-ist-an ] The baby boy name Tristan is pronounced in English as TRIHS-TahN or in French as TRiyS-TAON †. Tristan is used chiefly in the English, French, German, Romanian, and Welsh languages, and its origin is Celtic. Drystan (Celtic) is an original form of Tristan. The name is derived from either the Celtic 'drest' (meaning din, riot, tumult), or else from the Latin 'tristis' via Old French. The form Tristram was first adopted by English speakers in the early 12th century, famous from the hero of the Celtic folklore tale of tragic romance between Tristram and Isolde. Tristram was a Cornish knight, one of the most noble of King Arthur's Round Table, while Isolde was an Irish princess; they fell in love with each other after unintentionally drinking a love potion meant for Isolde and her fiance, King Mark of Cornwall. The Old French derivation from 'tristis' is associated with the tragic nature of the legend. The legend was later retold in many notable works, including Lord Tennyson's poems Idylls of the King (1859), and Wagner's opera Tristan and Isolde (1865), further promoting the popularity of the name. The name Trista (English) is the female form of Tristan.

Tristan is popular as a baby name for boys. The name's popularity jumped from the 1970s up to the 1990s; before that, it was of sporadic use only. Its usage peaked modestly in 1996 with 0.273% of baby boys being given the name Tristan. It ranked at #68 then. The baby name has since experienced a loss in popularity. In 2018, its usage was 0.166% and its ranking #123, but it was nonetheless the most popular among all boy names in its group. In 2018, 10 times more boys were named Tristan than the next most popular name, Tristen. Tristan has mostly been a baby boy name, though in the past century it has also been used for girls. In 2002, the name Tristan was given to 13 times as many baby boys than girls. 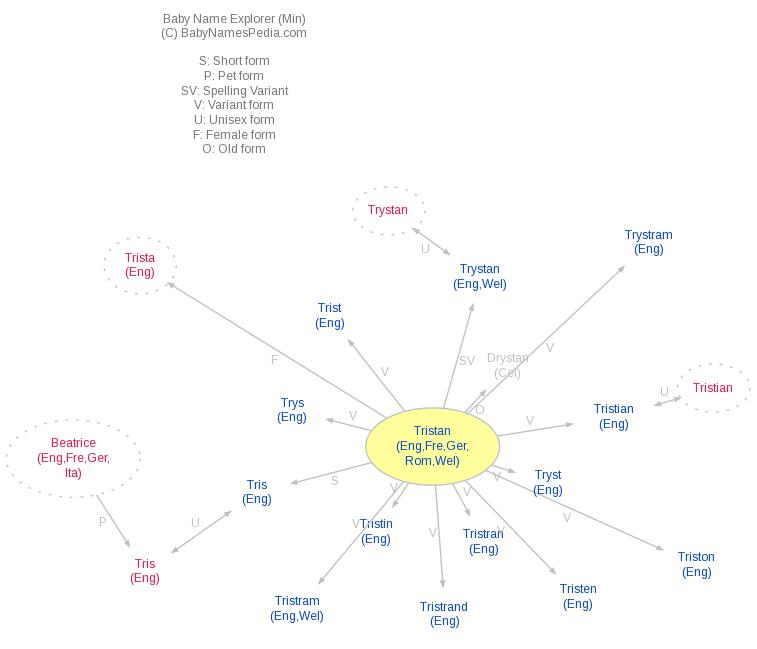