What does Troy mean?

[ 1 syll. troy, tr-oy ] The baby boy name Troy is pronounced as TR-oy †. Troy is used mostly in English and its language of origin is French. Troy's meaning is man from Troyes; foot soldier. The first name is either derived from the French surname, itself from the place name of Troyes in France, or else it could be from the Old Irish for 'foot soldier'. In modern times, the name is often associated with the ancient city of Troy which was besieged and eventualy sacked by the Greeks, a popular medieval legend described in the Greek Epic Cycle and retold in Homer's Iliad.

Troy is a classic favorite. Today it is still a fairly popular baby name for boys, though it was in more widespread use previously. The name increased in popularity from the 1950s up to the 1960s. At the modest height of its usage in 1968, 0.450% of baby boys were named Troy. It ranked at #40 then. The baby name has since experienced a fall in frequency. In 2018, its usage was only 0.047% and its ranking #363, but it was nevertheless the most commonly used within all boy names in its group. The name Troy has been mostly given to baby boys, though it has also been used as a girl name in the past century. In 1961, the name Troy was given to 35 times more baby boys than girls. 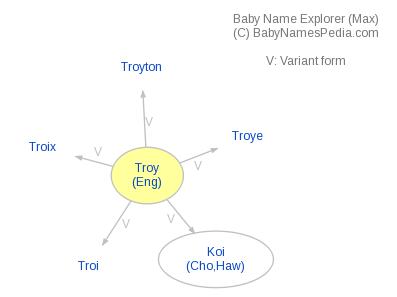