What does Trucker mean?

[ 2 syll. truc-ker, tr-uck-er ] The baby boy name Trucker is pronounced as TRAHKer †. Trucker's origin is English-American. Trucker is of the meaning truck driver.

A variant of Trucker is the contracted form Truck.

Trucker is uncommon as a baby name for boys. It is not in the top 1000 names. 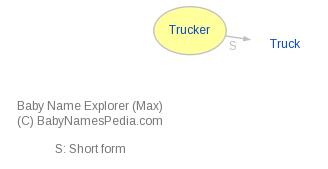