What does Tyler mean?

[ 2 syll. ty-ler, tyl-er ] The baby boy name Tyler is sometimes used as a girl name. It is pronounced as TAYL-er †. Tyler is an English name of Old English origin. It is from the elements 'tigeler' meaning tiler ; 'tigele' tile. The first name is derived from the surname, which is itself from the job title for someone who makes or lays tiles on rooftops for a living. The suname has been recorded in forms such as Tyler, Tylor, Tiler, and Tiller. A famous bearer of the surname is the American president John Tyler (1790-1862). See Tyler for more information.

Tyler is popular as a baby name for boys. The name's popularity rose from the 1940s up to the 1990s. Its usage peaked in 1994 with 1.497% of baby boys being given the name Tyler. It ranked at #5 then. The baby name has since fallen in popularity. In 2018, its usage was only 0.171% and its ranking #119, but it was nonetheless the most popular among all boy names in its group. In 2018, 7 times more boys were named Tyler than the subsequent ranked name, Ty. Tyler has in the past century been mostly given to baby boys. In 2007, the name Tyler was given to 43 times as many baby boys than girls. 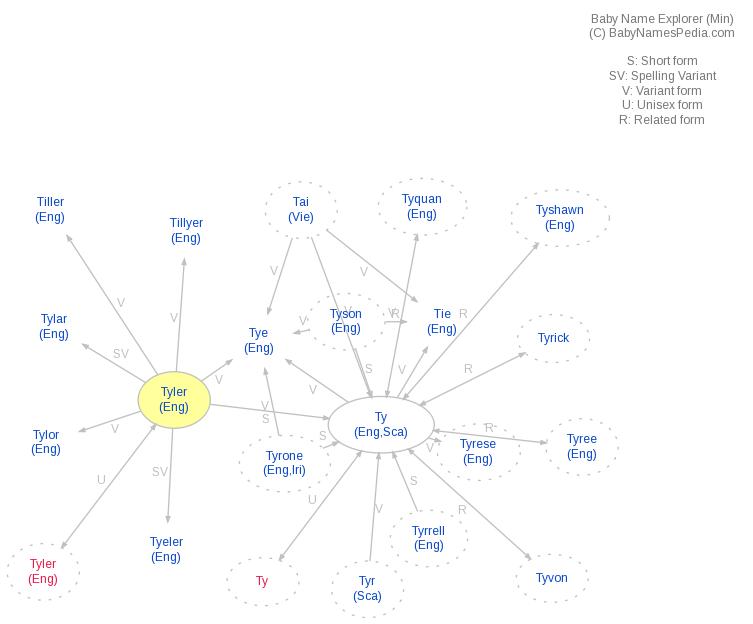