What does Ull mean?

[ 1 syll. ul(l), ull- ] The baby boy name Ull is pronounced as ahL- †. Ull's language of origin is Old Norse, Old English, and Germanic. It is predominantly used in the Scandinavian language. From Old Norse roots, its meaning is 'glory'.

In addition, Ull is a variant form of the English and French Ulric.

Ull is also a variant form of the English and German Ulrich.

Variant forms of Ull include the names Ul, Ule, and Ulle.

Ull is an irregularly used baby boy name. It is ranked outside of the top 1000. 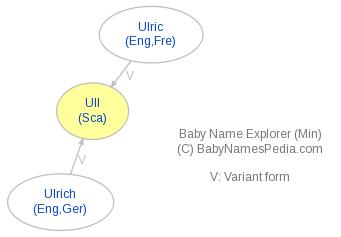