What does Ulman mean?

[ 2 syll. ul-man, ulm-an ] The baby boy name Ulman is pronounced AHLMaeN †. Ulman has its origins in the Germanic language and it is used largely in English. Ulman is of the meaning 'man from Ulm, Germancy'. The first name is derived from the surname borne by Ashkenazi Jews; the latter lived along the Rhine in Germany.

A variation of Ulman is Ullman (English).

Ulman is seldom used as a baby name for boys. It is listed outside of the top 1000 names. 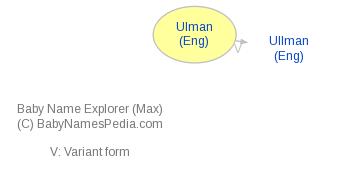