What does Uriah mean?

[ 3 syll. u-riah, ur-i-ah ] The baby boy name Uriah is sometimes used as a girl name. Its pronunciation is Yuw-RAY-ah (English) †. Uriah is largely used in the English and Hebrew languages, and it is derived from Hebrew origins. The name is of the meaning God is light. A biblical name, it is derived from the elements 'uri' meaning light, fire ; 'el' God, powerful. The name was borne by several characters in the Bible, including Uriah the Hittite, a soldier in King David's army who was killed by the king after the king's apparent adultery with his wife Bathsheba, a priest under Ahaz who built a pagan altar, and a prophet who was killed by Jehoiakim. The name later saw a decline in use from its association with the bootlicking character Uriah Heep in the Charles Dickens novel David Copperfield (1850).

Uriah is an English variant of the name Uriel (English, German, Hebrew, and Spanish).

Yuri (pet form) and Uri (English and Hebrew short form) are other variants of Uriah.

Uriah is fairly popular as a baby name for boys. The name's popularity has been rising since the 2000s. At the modest peak of its usage in 2014, 0.027% of baby boys were given the name Uriah. Its ranking then was #505. In 2018, its usage was 0.024% and its ranking #591. Out of the group of boy names directly linked to Uriah, Uriel was the most frequently used. In 2018, it was 26% more frequently used than Uriah. Uriah has predominantly been a baby boy name in the past century. 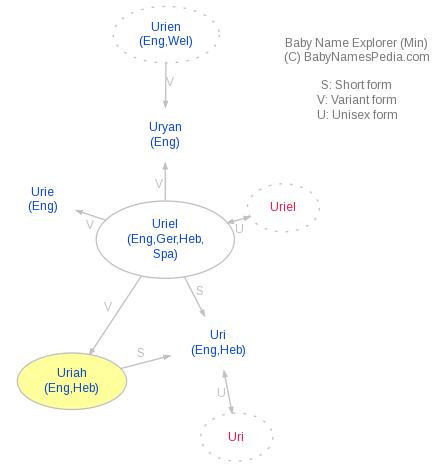