What does Uriel mean?

[ 3 syll. u-riel, ur-i-el ] The baby boy name Uriel is sometimes used as a girl name. It is pronounced in English as YUHR-iy-ahL †. Uriel is used chiefly in the English, German, Hebrew, and Spanish languages, and its origin is Hebrew. The name's meaning is God is light. A biblical name, it is derived from the elements 'uri' meaning light, fire ; 'el' God, powerful. The name was borne in the Old Testament of the Bible by a major archangel, and also by minor persons mentioned in genealogies in the Book of Chronicles. The name is mainly used by Jews.

Uriel has 14 variants that are used in English and other languages. Variants used in English include Uram, Uriah, Urie, Uriell, Urielle, Uriya, Uriyahu, Uryan, Uryel, Uryell, and Uryelle. The contraction Uri (used in Hebrew too) is another English variant. Uriano (Spanish) and Urias (Spanish) are foreign variants of Uriel.

Uriel is fairly popular as a baby name for boys. The name's popularity jumped from the 1980s up to the 2000s; before that, it was of sporadic use only. Its usage peaked modestly in 2008 with 0.036% of baby boys being given the name Uriel. It ranked at #387 then. The baby name has since experienced a fall in popularity. In 2018, its usage was 0.030% and its ranking #492, but it was nonetheless the most popular among all boy names in its group. In 2018, 26% more boys were named Uriel than the subsequent ranked name, Uriah. Uriel has mostly been a baby boy name in the past century. 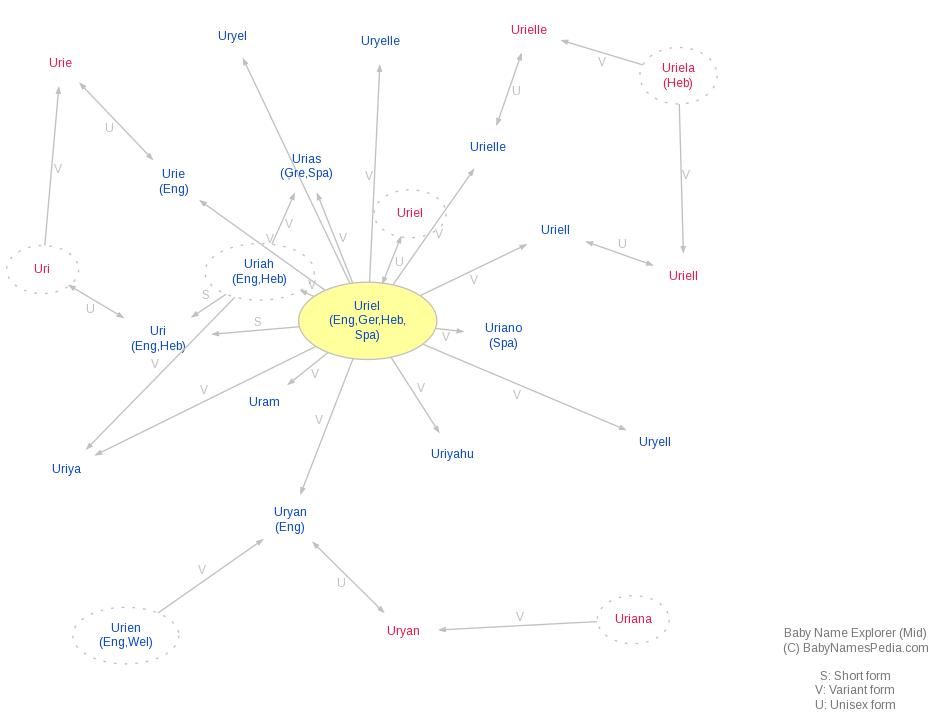